In istar2.0, Actor is divided into two types: role- the abstract description of the behavior of social Actors in a specific environment or field. Agent- an Actor with concrete entity representation.

Neededby relationship links a task to a qesource, indicating that participants need resources to perform the task. 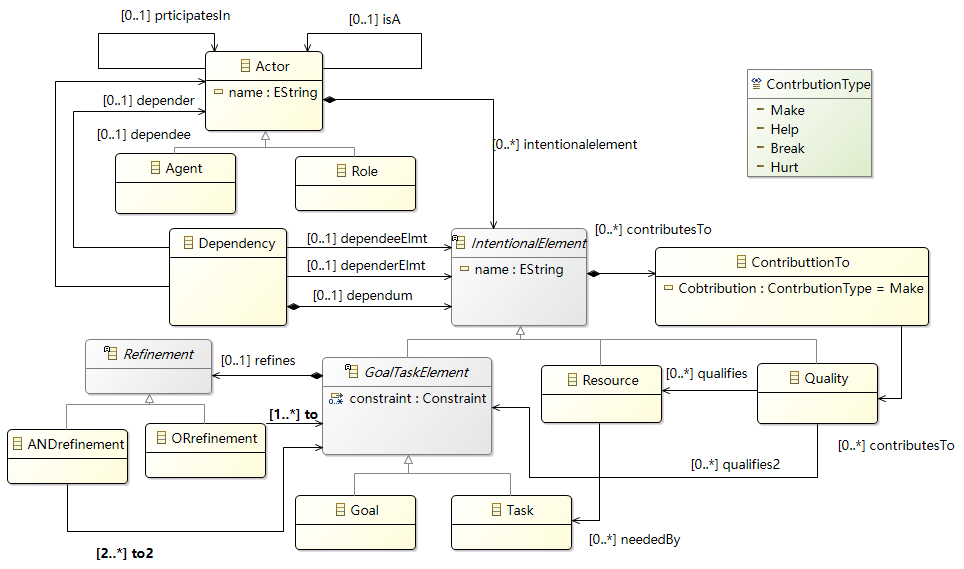 In this article, we will mainly use the UseCasaModel part to explain. The UseCaseModel is also divided into two parts. The first part is the use case diagram. The main elements here are Actor and UseCase. These two elements are connected by uc to obtain the basic use case diagram. The second part is the system sequence diagram. This part is mainly composed of Interaction and some elements that have an aggregation relationship with it. They are Message, Execution, and Combined Fragment respectively. They describe when a use case enters the system sequence diagram, the beginning of each Task, the end, and the cycle and selection process that may exist in between. UML Metamodels：

This section mainly explains how to map the target model to UML. We propose the following conversion rules. The correctness of the transformation rules is based on the semantic description of the target model and UML standard documents.

In UML, an Actor is an external entity that interacts with the system. It can be a user, an external system that can interact with the system, or a basic device. In the Goal Model, Actors are divided into two categories, Role and Agent. Agent is a specific instance, such as a person, organization, or department. It is not suitable to convert Agent to Actor in UML because Agent is more specific and has more limitations. Role is an abstract description of a certain group of people, such as students. It is closer to the meaning of Actor in UML, so it can be converted directly.

The rule R1 describes the process of transforming role in Goal model into Actor in UML:

Transforming Role in Goal model into Acter in UML：

The Use Case in UML describes the behavior of the system from the user’s point of view. It describes the function of the system as a series of events, and finally provides valuable observations for the operator. In the Goal Model, a Goal is the state that the Actor wants to achieve, and there is a clear completion standard. They all describe behavior or state from the perspective of Actor, so they can be transformed. However, not all goals can be converted to Use Cases, only goals at the root can be converted. At present, we do not consider the situation when Goal is connected to another Goal through Refinement. This problem will be improved in the follow-up work.

Formula R2 describes the process of transforming Goal in Goal Model into UC in UML:

Transforming Goal in Goal model into UC in UML：

The Task in a Goal Model represents an action that the Actor wants to perform, usually to reach a certain Goal. The ‘Interaction’ part of UML is mainly composed of the following elements: ‘Message’, ‘Execution’ and ‘AbstractEnd’. All of these elements may be involved to complete a single task in the entire Use Case sequence diagram. They describe the process of the same task. So, we can convert the Task to the entire ‘Interaction’, but if the Task is connected by multiple other Intentional Elements with ‘OrRefinement’, it will not be converted in any way.

The rules R3 and R4 describe the process of transforming Task in Goal Model into child elements CallMessage and ReturnMessage of message in UML:

Transforming Task in Goal model into Interaction in UML：

The rule R5 describes the process of transforming Parameter in Goal Model into Operation in UML:

The rule R6 describes the process of transforming Resource in Goal Model into Parameter in UML:

We will take the process of interaction between cashiers and customers in CoCoME (supermarket shopping system) in the RM2PT case as the case of this experiment. The description of this process is mainly as follows: 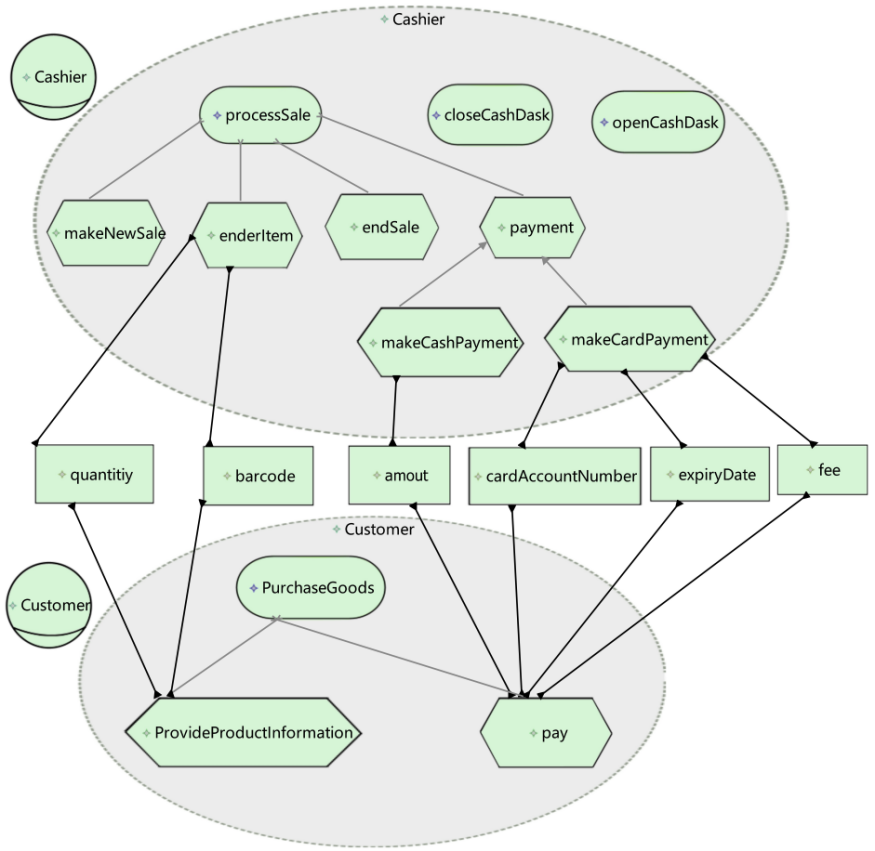 First, cashier can perform three actions: OpenCashDesk, CloseCashDesk and processSale. This part constitutes a simple use case diagram. The ‘processSale’ action, can be expanded to get the system sequence diagram. This part mainly reflects the interaction with customers. First, makeNewSale is initiated and then the enterItem loop is initiated, requiring the customers to provide the cashier with barcode and quantity information about the goods until it ends. then we proceed to the next action, endSale. Finally, a selection to either MakeCashPayment or MakeCardPayment is needed. If cash payment is chosen, a specific amount is required. If on the other hand card payment chosen, the card account number, expiry date and fee is required. The last part is the domain model, which mainly preserves the entity data of the above process. The stored data include ‘cashDesk’, cashier, payment, ‘cashPayment’, ‘cardPayment’, item and ‘salesLineItem’.

According to the above conditions, we need to create the corresponding Goal model. First, create a cashier of role type with three goals: openCashDesk, closeCashDesk and processSale. Set them to goal. In order to achieve the goal of ‘processSale’, we need to do the following four tasks. The first task is to make a new sale, set it as a task element, and connect it with ‘processSale’ through ‘AndRefinement’, so that this task belongs to the above goal, and then connect it to the next ‘Task’ through ‘previousTask’, so that the order between tasks can be obtained. The second task is the ‘enterItem’. In addition to the above operations, because this is a loop in a special task, its two properties ‘isCombinedFragment’ and ‘isLoop’ should be set to true. In this way, the task will have the loop property during conversion. The third task is ‘endSale’, which is a common task. It only needs to do the same operation as the first task. The last task, payment is also a special task. It is the choice of a special task. In addition to the basic operation, its two properties ‘isCombinedFragment’ and ‘MethodAlt’ should be set to true. To accomplish this task, you need to perform two new tasks. The first one is MakeCashPayment, which is connected to the task Payment with ‘OrRefinement’. The second is ‘MakeCardPayment’, which is connected to the task Payment with ‘OrRefinement’.

The transformation goal of the case 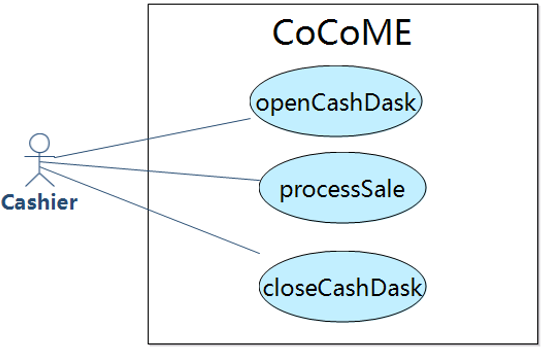 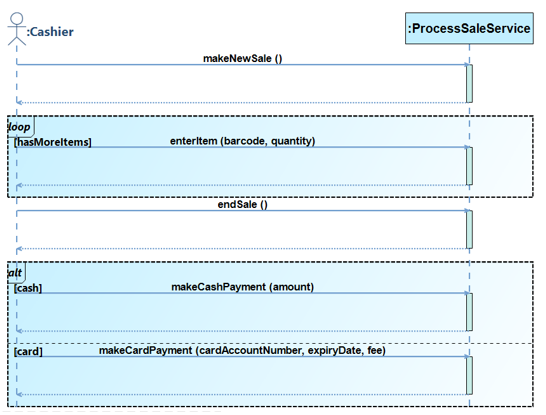 The transformation results are divided into the following two parts. The first part is a use case diagram, which describes the relationship between user Cashier and his/her UseCases. Then the system operations of the use cases processSale. The transformation success rate from the Goal model to the top-level use case diagram can be reaches 100%. The success rate of the system operation and message can be reaches 87.2%.

Transformation result from Goal model to Use Case diagram 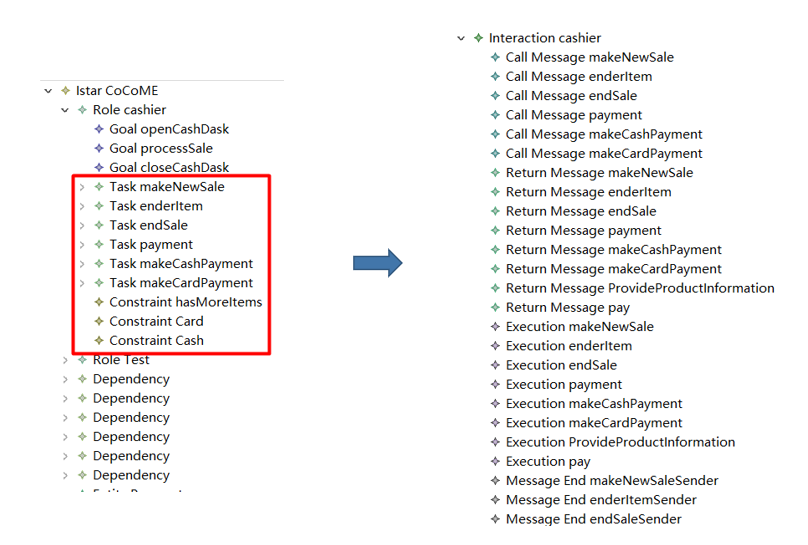